News
Paternity Test Without Father: Is It Possible? 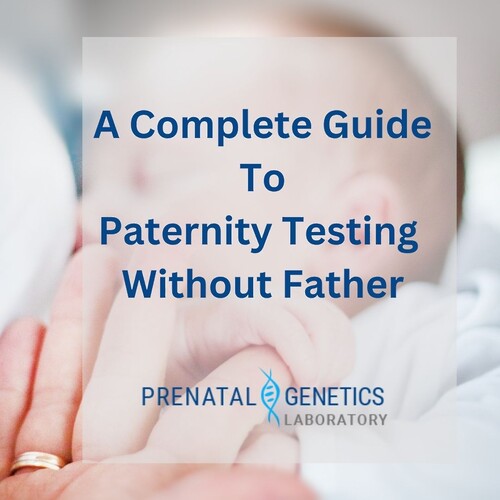 Pregnancy can be a joyous occasion for most expectant couples. However, in some situations, the paternity of the unborn child might be undetermined. This is where a prenatal paternity test comes into the picture. It is a simple process wherein the blood sample of the pregnant mother, containing the DNA of the unborn child is compared with the cheek swab of the potential father. The cheek swab also contains the DNA sample of the prospective father, which is compared to the sample of the child to establish paternity. This process is highly accurate, wherein the paternity can be established with almost 99 percent certainty.

However, the situation becomes a lot more complicated if there is no father in the picture. Be it for legal reasons or if the father is deceased, a paternity test without a father is possible in myriad ways. These methods will be explored down below.

Is it possible to undertake a prenatal paternity test without the father?

Not having a clear potential father in the picture can seem like a major challenge in determining paternity. While it is a bit more complicated than a regular prenatal paternity test, it is still possible to do so in 3 major ways.

With a basic overview out of the way, it is time to explore the 3 major ways in which a paternity test can be conducted without a father in further detail.

It is possible to conduct a discreet paternity test without the father’s knowledge. This is known as a non-legal prenatal paternity test, as it can’t be used in a court of law. This is because the father has not given clear consent to undertake the test or have his sample collected for testing. As such, a diagnostic center can guide you on how to obtain samples from the potential father.

While it might seem unethical at the outset, there are several reasons for undertaking such a secret paternity test. It is possible that the potential father has refused to take accountability for his actions or refuses to acknowledge that the child is his. In such cases, it is possible to conduct a paternity test without the father. However, do remember that this can’t be used as evidence for legal matters. For cases wherein the paternity DNA test is required for a legal dispute, the court usually orders their own mandatory test. Or, at the very least, they offer an option to get it done from a few accredited labs. Once the sample has been collected, the test follows the usual procedure, wherein the DNA of the child is compared to the DNA sample of the prospective father.

Paternity DNA test where the father is deceased

Not all situations revolve around an absent father or someone who doesn’t want to take responsibility. In some cases, the potential father might have passed away, and there might not be any DNA sample of this person at hand. In such cases, the paternity test can be conducted without the father in the following ways:

In some circumstances, the use of unconventional samples of the potential father might be warranted. Unconventional in this case encompasses a paternity test with a hair follicle, or perhaps a paternity test with a toothbrush, both of which contain DNA samples of the would-be father. While these might work, the best samples are derived from used ear swabs or tissues, as they can better concentration of cells, making it easier to extract DNA samples.

This might be useful in cases where the paternity of the father is completely uncertain, or the potential father is missing or out of the picture. Once the lab has obtained these samples, they will be sent for analysis. Depending on the quality of the DNA samples obtained in this case, it might be possible to get an accurate result within 5 to 10 days. Once the sample has been successfully obtained, the rest of the test is pretty straightforward. The DNA of the father is compared to that of the child using the mother’s blood sample. Lastly, unconventional samples are mostly used as a last resort, when regular means of sample collection like cheek swabs or blood tests to determine paternity is not possible for some reason. Hence, it is possible to get a paternity test without a father by simply using his personal effects for testing.

I found my alleged biological father, but he has passed away. How do I confirm my paternity in this case?

Not having a biological father can be stressful for a child growing up. In such cases, it is natural to opt for a paternity test on potential fathers to find the biological father/parent and try to establish a connection. However, it can be devastating to know that they may have passed away. While it is tragic, it is still possible to find out if the deceased is actually the father using DNA testing.

One way is to sift through their belongings such as clothes, hair brushes, and toothbrushes which might be stored for sentimentality. The caveat here is to get these samples as soon as possible, as the DNA samples in them might become ineffective after some time. If this option is not feasible, DNA testing without a father can be done with the help of their siblings, grandparents, or aunts and uncles, basically any living relatives of the deceased.

I want my baby’s father to take a paternity test after separation, but he has refused to take the test. How should I proceed?

This is a rather sensitive case and should be handled in a nuanced manner. The best way is to convince the potential father to take the test, as it will make matters easier. However, if it is not possible, a discreet paternity test can be conducted. DNA samples for this paternity test can come from hair follicles or toothbrushes. As mentioned earlier, such paternity tests can’t be used in a court of law. Lastly, the father’s relatives can be tested to establish paternity. But no matter what course you take, you might end up alienating the father, so proceed with caution, and take legal counsel if required.

Thus, in the following ways, a prenatal paternity test can be done without a father. Moreover, it can be done in a non-invasive manner, rather than more invasive DNA tests in the womb such as amniocentesis or CVS. Apart from the methods and some real-life scenarios, a few common questions regarding paternity tests will also be addressed below.

Q: What are the ramifications of a father refusing a court-ordered paternity test?

Ordering a paternity test is a norm in many child custody battles and family disputes. While the father has the right to refuse a DNA test without consent, even if it is court-ordered, there would be severe legal ramifications for it. For one, he would be held in contempt of court, warranting steep legal fines or even criminal charges. However, in most cases, the courts closely sift through evidence before ordering a paternity test. Hence, it might not be necessary in all cases.

Q: Can a paternity test be falsified, if so, can it be contested?

While a prenatal paternity test can seem watertight, even these can be inaccurate on rare occasions, and hence, can be contested in court for authenticity. There are three scenarios where this is particularly the case:

In conclusion, DNA paternity tests are admissible as evidence in court, but they may also be subjected to errors or malpractices.

Q: Do mothers need to be tested during a paternity test?

This will be majorly determined by the timeline of the paternity test, that is, the DNA test conducted when the child is in the womb or after birth. In the case of the former, the mother would be required to give her blood sample as it is the only way of obtaining the DNA sample of the unborn child. In the latter case, the child can give their cheek swab which can be directly compared with the DNA sample of the father. If the father is not available, the paternity test can be done using the above-mentioned methods. In either case, after birth, the mother’s sample might make testing easier, but it is not necessary. All she needs to do is give consent for the child to be tested if they are below the age of 16.

Q: Can twins have different fathers?

Twins are generally categorized as identical or fraternal. Identical twins are conceived from the same egg whereas fraternal twins are conceived from two different eggs which are mated at the same time. Hence, this scenario can occur only with fraternal twins. In rare cases, a phenomenon known as heteropaternal superfecundation occurs, wherein the two eggs are fertilized by the sperm of two different men. This makes the fraternal twins half-siblings instead of actual siblings, even if they came from the same womb at the same time. This phenomenon came to light only after the latest innovations in DNA testing technology.

Q: Can a DNA Test tell which brother is the father?

In cases where two or more brothers might be the potential father, it is possible to accurately determine who is the actual father using a prenatal paternity test. Since the child has a total of 46 chromosomes, they receive 23 pairs from the father and the rest from the mother. Hence, provided that the two brothers have the same set of parents, the child’s paternity can be established. It is also possible to establish paternity if the two siblings are half-brothers. In both cases, it is ideal if the mother can also provide her sample, as it makes the screening process easier.

To get a prenatal paternity test or a blood test to determine the child’s gender, reach out to us at Prenatal Genetics Lab. Run by research scientists, we have decades of experience in human DNA diagnostics. Affordable and non-invasive, our tests are also highly accurate. To know more about our services, contact us today.